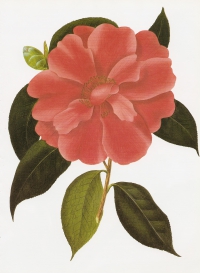 In June of 1999, the Alabama Legislature designated the camellia, (Camellia joponica L.) the Official State Flower.