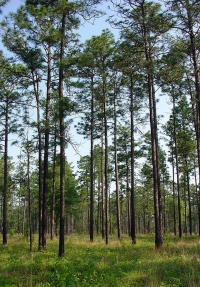 The official state tree of Alabama is the Southern Longleaf Pine (Pinus palustris Miller). The longleaf pine is mainly found in the lower two thirds of Alabama and can be identified by it's long needles which are about 12 inches long, the longleaf pine has a cone that is around seven inches long.  The tree is mostly found in well drained sandy soil and grows to a height of 150 feet and a diameter of up to four feet.

More in this category: « State Flower of Alabama State Gemstone of Alabama »
back to top