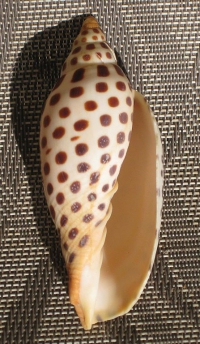 The official seashell of the state of Alabama is the Scaphella junonia johnstoneae, or Johnstone's Junonia. The Scaphella junonia johnstoneae was made the state shell in 1990 by Act no.90-567. This shell was named in honor of Kathleen Yerger Johnstone, an amateur conchologist (someone who studies shells and molluscs) from Mobile, Alabama by a Harvard scientist, Dr. William J. Clench.  He named it after her due to the many books and speeches she produced that popularized the seashell.