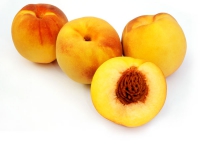 The official State Food (Tree Fruit) of Alabama is the Peach (Rosacea, genus Prunus, Species P. persica).  The peach was declared the Alabama State Tree Fruit in 2006 via state legislature Acts of Alabama 2006, HB205. In Alabama there are 34 different varieties of peaches grown throughout the state, most commercial growers of peaches in Alabama harvest their fruit later in the season due to them being sold locally in the state. Peaches in the southern areas of Alabama are harvested in early May and in the northern sections of Alabama they are harvested in September.  You can find Alabama peaches in grocery stores in Alabama as wells as road side fruit vendors in the state.

More in this category: « Alabama State Mammal State Quarter of Alabama »
back to top