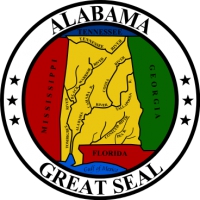 Albama's state seal was originally designed in 1817 by the first governor of the Alabama Territory which was William Wyatt Bibb. The great seal of Alabama displays all the surrounding states once territories and all the major rivers of the state. For over 50 years the Great Seal of Alabama remained unchanged until the civil war which then it was recreated as a new seal with an eagle standing on an American Shield holding a banner which read "Here We Rest"  In 1939 a bill was approved by the Alabama Legislature and Governor Frank M. Dixon to restore the original seal which replaced the Seal of 1868–1939.

More in this category: « State Flag of Alabama Alabama Coat of Arms »
back to top