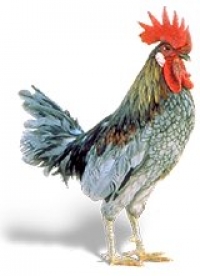 State Bird Description: The Delaware Blue Hen is not species of chicken but more of a historical figure in Delaware's history. The history goes back to the revolutionary war when Delaware Regiment was said to carry Blue Hen chickens with them into battle which was fokelore. The name is believed to come from how the Delaware Regiment looked, with blue coats, white breeches and a red plume from their hat. Which some would say makes them look like a Blue Hen. Cockfighting was popular in that time and fighting chickens was fearless and would never back down like the Delaware Regiment.

Where It's Found: The University of Delaware's College of Ag & Natural Resources maintains a breeding group of the Blue Hen Chicken (Gallus gallus) on the campus farm.