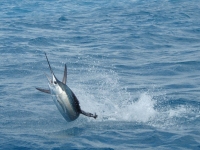 Where It's Found: The Atlantic Sailfish is found in the waters of the Atlantic Ocean around Florida and the Caribbean islands.