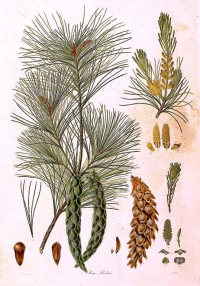 State Flower Description: The White pine cone isn't a flower since gymnosperms do not have true flowers. Maine is the only state that has designated a cone the representative of the state rather than a typical flower due to the large populations of pines in the state. The Eastern white pine cone trees belong pine tree family, also called as Conifers.

More in this category: Maine State Bird »
back to top