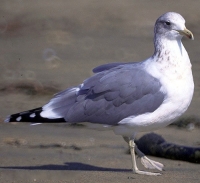 State Bird Description: The California Gull is a medium sized sea gull which has a mostly white body with grey wings, it is slightly smaller than the hearing gull and has a smaller bill. It's the state bird of Utah due to how it was said to help the Mormon settlers in dealing with a plague of Mormon crickets. A monument in Salt Lake City commemorates this event, known as the "Miracle of the Gulls".

Where It's Found: The California Gull is a resident of the Pacific Northwest coast of California but breeds in around the lakes and marshes of western North America from Northwest Territories, Canada south to eastern California and Colorado.