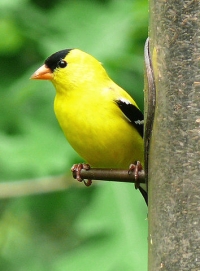 Where It's Found: The Willow Goldfinch can be found in the majority of the US and prefers open country such as fields, meadows, flood plains. It often can be found in gardens and backyards especially if there is a feeder of thistle close by.