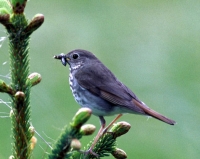 State Bird Description: The Hermit Thrush is a medium sized North American thrush that is approximately 6 to 7 inches in length and weighs around 1 oz. The Hermit Thrush has a brown topside and a lighter almost white underbelly. The song of the Hermit Thrush is often described as the finest sound in nature and has been noted in American History from Walt Whitman naming it as a symbol of the American Voice, to poetry by Amy Clampitt.

Where It's Found: The Hermit thrush migrates to winter in the southern United States and south to Central America but some remain in northern coastal US states and southern Ontario.